The mission of CrimesAgainstPeace.org  is to articulate and document the legal and ethical principle that war-making itself is illegal and wrong, in the hope that awareness of this principle will help propel actions and policies needed to heed President Kennedy’s dire warning that we must eliminate war or war will eliminate us. In order to move in this direction without losing our way, it is necessary to be guided by an affirmative vision of peace and, in the words of Martin Luther King, “an all-embracing and unconditional love for all mankind.”

This site is intended to serve as an educational and research resource that brings together in one place ethical writings, legal documents, and other materials bearing on the rightness or wrongness, legality or illegality, of going to war and to be a forum for discussing those issues.

“Crimes Against Peace” may sound like a slogan invented by anti-war activists in the 1960’s, but it is actually a term used by the U.S. government, the United Kingdom, France, and Soviet Russia in the 1945 treaty that established the Nuremberg Tribunal — a term used to refer to the criminality of war-making.   That treaty (the London Agreement) defined “Crimes Against Peace” as  “planning, preparation, initiation or waging of a war of aggression, or a war in violation of international treaties, agreements or assurances.”  (The other two categories of crimes set forth in the London Agreement were War Crimes and Crimes Against Humanity.)  In its Final Judgment the Tribunal held: 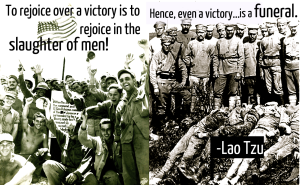 “War is essentially an evil thing.  Its consequences are not confined to the belligerent States alone, but affect the whole world. To initiate a war of aggression, therefore, is not only an international crime, it is the supreme international crime, differing only from other war crimes in that it contains within itself the accumulated evil of the whole.”

U.S. leadership in establishing the illegality of war-making dates back to 1928, when the U.S. and France led the world in adopting the “Kellogg-Briand Pact,” a treaty condemning recourse to war, renouncing it as an instrument of national policy, and promising to settle international disputes of whatever kind by peaceful means.  Similarly, the UN Charter envisions eliminating the “scourge of war,” and requires nations to settle their disputes peacefully and to refrain from the threat or use of force against the territorial integrity or political independence of any state.

Yet today, the United States attacks and invades, and threatens to attack or invade, other countries and provides military equipment and training to rebel forces, based on a variety of rationales including protecting national interests, humanitarianism, destroying weapons of mass destruction, toppling dictators, and promoting democracy.  It acts as if there were no legal restraint on a nation (or at least on the one remaining superpower) deciding to wage war.  This is a marked, but little noticed, about-face from legal and ethical principles the United States led the world in adopting not long ago.  (For more on this, see the “Treaties,” “Nuremberg,” “Undermining Law,” “Articles” and “Blog” pages of this website.)  As you will see by visiting the “Wisdom” and “Articles” pages, war-making also violates ethical principles laid down by philosophers and statesmen as long as 25 centuries ago, as well as by modern leaders, including Gandhi, John F. Kennedy, and Martin Luther King.

As Martin Luther King said of war, “somehow this madness must cease,” and in causing it to cease, “we are confronted with the fierce urgency of now.”

On this website under “WISDOM,” you will find passages about war and peace that are remarkably relevant today written by philosophers and statesmen in  ancient Greece, Rome and China; by  the Renaissance cleric and scholar Francisco de Vitoria; and by such modern leaders as John F. Kennedy, Gandhi and Martin Luther King.

Under “TREATIES ” you will see relevant provisions of the UN Charter, the Kellogg-Briand Pact, the Nuclear Non-proliferation Treaty, the Universal Declaration of Human Rights, and other key international legal documents bearing on war and peace.

Under “NUREMBERG” are pertinent parts of the London Agreement that established the Nuremberg Tribunal; words of Supreme Court Justice Robert Jackson in his role as chief prosecutor for the United States; and excerpts from the Final Judgment.

In “UNDERMINING LAW” you will find, among other things, parts of a Bush-era law that forbids U.S. cooperation with the International Criminal Court — the court that most other nations have established to put an end to impunity for the most serious crimes of concern to the international community.

Under “ARTICLES” you will find papers and articles written by the author of this website, Allen Ferguson, on subjects related to war and peace, and under “BIO,” a brief autobiographical sketch.

Under “BLOG” you will find Allen’s blog on Crimes Against Peace and a way for you to send responses to the blogs.  To respond to a Blog, click on the title of the blog that appears near the top of the page and scroll down to the bottom of that version of the blog.

To contact the creator or administrator of this website and provide comments, go to “CONTACT.”  You may also use “CONTACT” to request Allen as a speaker or discussion leader on topics related to Crimes Against Peace.

This is a non-profit, educational website that addresses issues of philosophy, politics and law.  It does not constitute or provide legal advice.